inside my personal journal 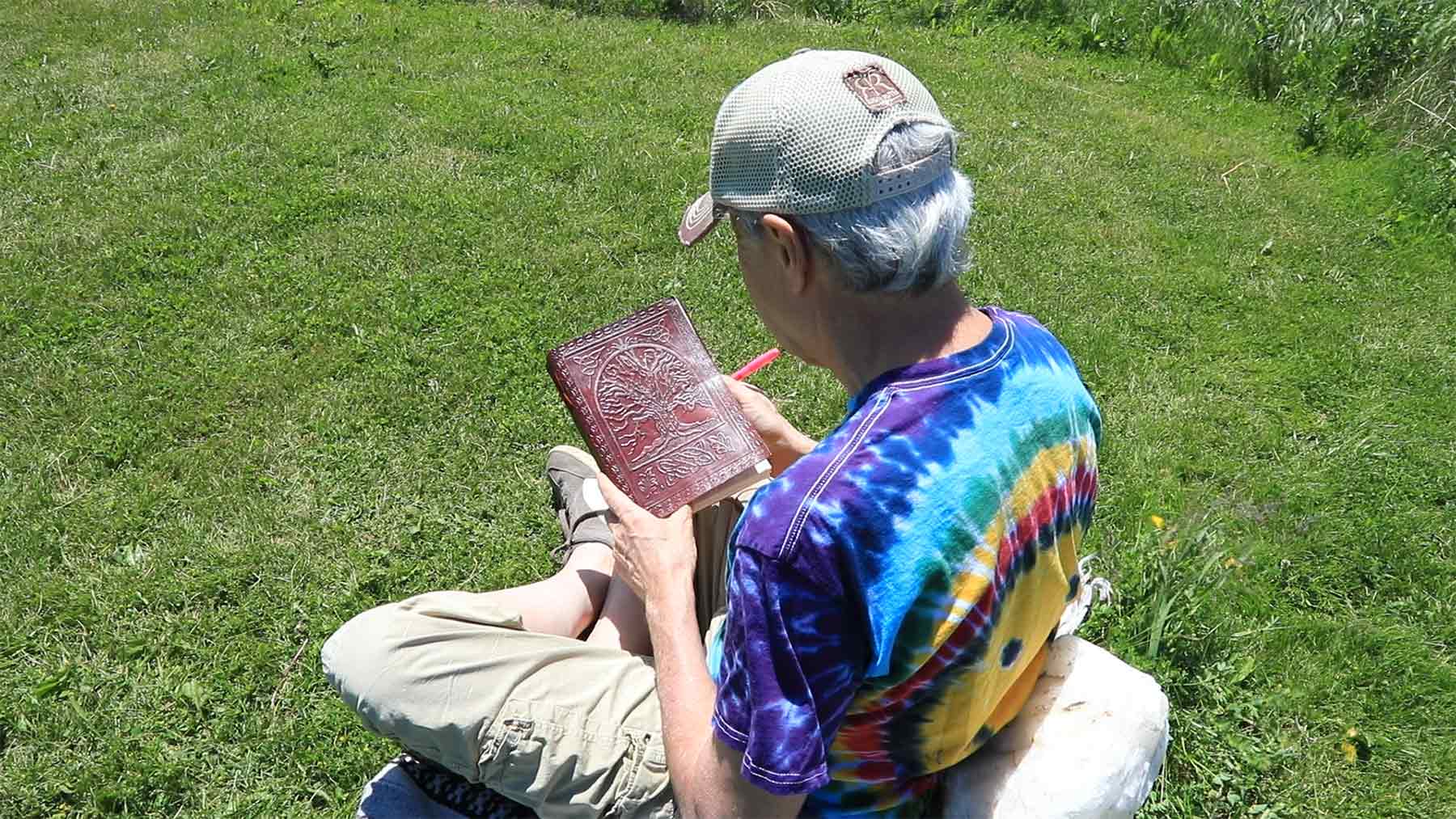 Hello, my name is Robert W Connolly. As an author of several technical books and as a director of a several travel TV series, my name often gets confused with another producer/director named Robert/Bob Connolly that lives in Australia – so I added W after my uncle William as a middle initial. But most people just call me Bob.

I’m producing a documentary on Nikola Tesla and writing an interactive Apple iBook titled “Tesla’s Medicine: Healing Fields.”  In this production I share my 10 year journey around the world to research and film the the history of Nikola Tesla’s ancient healing machines and how they are used today.  Here in these pages, using short video clips, I will take you behind the scenes of my diary to show you what I have uncovered and keep you informed as to the progress of the productions.

I’ve completed principal photography, the footage is in the can as we call it in the film industry and have now moved onto writing the scrip, rough editing the footage and writing the music that will eventually show up as as a online documentary and as interactive video inside the Tesla’s Medicine: Healing Fields eBook.

Over 100 hours of original on location footage of our own scientific research was videotaped, some in our own laboratory that was specifically constructed to capture microscopic, infrared, ultraviolet and Kirlian electro-graphic hi-def video.

As a producer/director, I feet it’s important to do a good job researching the subject and then bring the subject matter to life beyond the usual talking heads which I tried to minimize. I felt it was extremely important for me to fully understand the complexities of how “Energy Therapy” works. Many writers and directors research the subject using only website materials and published articles, but I wanted to learn the truth in a sea of conflicting internet disinformation.

The main problem the public and professional healthcare providers face is that there are no approved public or even private schools that teach the subjects of sound, light or magnetic field therapy. Most “Energy Therapy” type of books are thinly disguised marketing tools to sell one particular product or increase the authors personal appearance fees. To me the only solution was to travel to the foreign countries that manufacture “Energy Therapy” machines to shoot the factories, buy the devices, test them in our laboratory and share the results with you – our audience – on this website and in the final eBooks and TV documentary.

The subject matter of healing with frequencies is extremely vast and is veiled as to not make medical claims for intended use. Every product that adds some sort of energy to the body seems to be called a wellness device as required by the FDA.  With so much history behind the technology, I found it hard to explain to others why so little credible information is available to the public. I was often presented with ‘If it’s so amazing, why has my doctor not heard about it?”  When I played them little video clips of my work in progress of the famous Swiss doctors that treat the Hollywood movie stars for cancer with energy therapy, it seemed to make all the difference.  It’s not popular here in North America- yet.

I’ve shared my work in progress at health conventions and instead of power point slides, I show rough, short five minute video clips and narrate it live.  This presented concepts as to what I would say in the final documentary. It was also a great way to judge the audience reaction as I was swamped with questions at the end of the lectures. I listened intently to what got them excited and paid attention to their comments. It shaped the collection of my content immensely – I just kept shooting researching ……..and learning at the same time.

Tesla’s inventions in medicine is vast, spanning the entire frequency spectrum from computing the low frequency of the earth – about 10 Hz right up to ultraviolet light which is measured in nano-meters.

I never had a specific stop date in mind as I was just wanting to get the complete picture of what Tesla had invented. I have no broadcast commitment or restrictions to follow and was not filming someones approved script. I just threw myself into the topic of energy medicine, tried to be as honest as possible to the spirit of documentary production and capture the “truths” where the synchronicity lead me too – and there were many.

Helping to Guide the Industry

Some documentary producers with an agenda and funding from corporations are good at creating disguised infomercials. I’ll admit that along the way, many manufacturing companies that I visited asked me to produce training videos and marketing materials because I understood their industry which is quite complicated. I said yes to some – mainly because they had such a wonderful product and no way to get it into the publics hands.

Translating “Energy Therapy” German user manuals into english allowed me to become an expert in the field. Instead of a film producer,  I felt like I was the hub of a wheel that was advising the various manufacturing companies how to get FDA and Health Canada medical device licences for their product. Understanding medical device regulations is something really intended for lawyers but I did not want to bring out a film that inspires the public to use “Energy Therapy” devices and have them find that they were not allowed to be used in Canada.  To this issue, a big time consuming part of my mission was to help them get Health Canada and FDA approvals which was not a simple task. It really provided me with a big picture of what lies ahead for doctors and the general public that are not taught about energy therapies in medical schools.

I initially set out to producing a film about electromagnetism, but as I sought the knowledge, I learned from German experts that when a combination of sound, light and magnetic fields are used together in the hands of “gifted” healers where money was not the primary concern – true miracles where manifested. This is where the subject of “Quantum” medicine and the plecebo effect aligns or intersects.  My job, as a journalist would be to explain this complicated process to a world where most people think there is a pill to solve every health problem.

To capture the footage and study the medicinal effect of the medical devices took over 10 years to accomplish.  I interviewed hundreds of people and some wondered if the project would ever come to light because I was taking, what they felt, was an unreasonable amount of time to release a film. Like James Cameron’s production of the Titanic,  I just kept saying soon, be patient, i’m still learning and working on it as new technologies became unveiled.

I felt that if I put the information out there and was wrong, I could not take it back. Like most scientific articles conclude with “more research is needed,” that is exactly the way I felt. It had to be conclusive proof that I could see for myself from research we did in The Rose Lab which was constructed for this purpose.

When I started the project in 2009, there was almost no information about electromagnetic therapy on the internet because it was either illegal to make claims for it’s use or it was discouraged by medical authorities. There was a definate blackout placed upon it. The research brought me to the inventions of Nikola Tesla who had started companies such as the Tesla Electrotherapeutic Company in 1906. Gradually as the years went by, in 2011, doctors such as Dr OZ stepped out of the shadows to introduce it to the public on TV which caused a huge shift in awareness and the dam burst wide open.

With this re-awakening, a tremendous amount of disinformation has flooded the internet and once again, the con men “Quack” doctors – some with fake degrees are everywhere! Many “Energy” devices that really do work as I’ve tested, were now being sold for additional income by well meaning multilevel marketing moms and pops that have absolutely no clue of what they are talking about. These people, more than anyone, need to get an education on how frequencies effect the body – both good and bad. They are the front line warriors that are leading the charge to make the population aware there are safer alternatives to treat pain and avoid opioid addiction.

Detailed scientific information is extremely hard to release with on-demand videos such as Netflix. The audience would be overwealmed. Therefore, I have decided to share my work in progress and the secrets I have learned with other healthcare workers on this website. It’s my “behind the scenes making of “Tesla’s Medicine: Healing Fields” documentary that will eventually be available on-demand on the various platforms such as Apple iTunes.

Here on this website and on YouTube – you will be able to view raw rough select footage of my journey in seeking ancient and new medical technology, boldly going were few have gone before. I am hoping that when my audience sees this material, it will clear up the disinformation campaign from both the medical community and the “quack” doctors.

By viewing the content on this site, you will learn that the subject matter of the films are a bit controversial because it features disruptive technologies that will allow the user to take healthcare into their own hands. Disruptive technologies have effected newspaper publishers and broadcast networks that have been replaced by do-it-yourself Amazon book publishers and YouTubers that are producing some amazing content that is causing a huge shift in the traditional healthcare agencies – especially when it comes to the treatment of cancer.

At this time I would like to emphasize the word “complimentary.”  It’s sort of like holding up a white flag and saying, “OK, lets put the best of our worlds together and figure out how we can live in peace.”  Take healthcare into their own hands. It costs money to fix your home when things break. You can’t expect the government to fix your home.  This website is all about making an informed decision so you can purchase the right tools to make a healing room in your home.  Energy therapy is for use in your home every day by your whole family and that includes your pets. Don’t abandon your doctor. Make his work more effective. The future is personalized medicine in your own home.

I am not a doctor. I have no medical degrees. I do seem to have a talent for locating research that your doctor is not yet aware of because “Energy Therapy” is not yet part of the course curriculum at medical universities. By the way things are shaping up with government regulations, it will take some time to make it’s way into those institutions. My observation at this time is that it’s looking like the governments are wanting you to bring the devices into your home. You pay for your healthcare – you become the doctor.

My free time is often spent in nature walks through the forest, but I also like to take long breaks from sitting behind my computer to talk on the phone to offer private consulting services – not as a doctor of medicine, but as an educator in energy therapy.  Individuals that want to take healthcare into their own hands and purchase their own medical devices, which may be very costly, are faced with a daunting task. I like to present this information to large audiences at health conferences or one on one on the phone.

I look forward to sharing my journey with you.